Rotam is a world-class manufacturer in the crop protection market for insecticides, herbicides, and fungicides aimed to support growers in their need for innovative solutions on their farms. They leverage their global platform to deliver high-quality, grower-focused crop protection solutions. 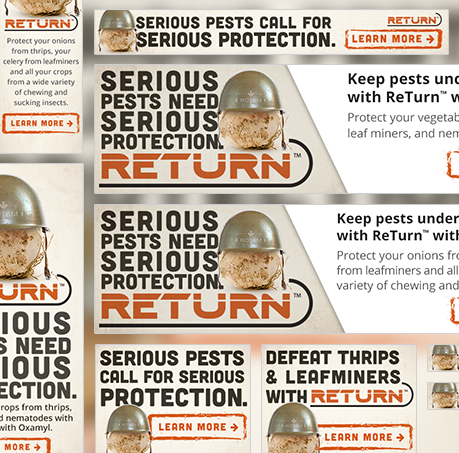 Growers consistently encounter challenges with Nematodes attacking crops year after year, causing billions in loss. The active ingredient Oxamyl, a compound that effectively controls them, had a gap in availability and negative history with a competitor manufacturer. Rotam sought Stratagon’s help to position this product back on the market to those in the fruit and vegetable markets.

Once Rotam received EPA registration for the insecticide/nematicide, they sought to establish a strategy to reintroduce Oxamyl to the market as a product called ReTurn®. Given the active ingredient history, the primary marketing challenge was to create awareness and education to growers on the product, aptly named due to its “return to .” Stratagon and Rotam ran a series of programmatic digital ads to build this brand awareness, educate the target population, and introduce returning availability of Oxamyl.

Oxamyl had a gap in availability and a negative history with a competitor manufacturer.

The growers did not know that Oxamyl had been reintroduced, so they needed to be educated on product availability.

Rotam needed to renew growers’ opinion of the product due to negative reputation with a competitor manufacturer.

ReTurn controls crop-impacting nematodes through reducing feeding, movement, reproduction, and hatching. As important to their effect is the manner in which they attack: nematodes silently kill crops underground before growers realize it.

The campaign strategy aimed to educate growers that Rotam recognized the importance of the Nematode problem to the grower community and invested in a solution with the reemergence of Oxamyl to market in order to protect crops in advance from specific pests.

The ad creative features an onion with a protective helmet to bring a lighthearted approach and draw in growers to learn more about the product and what it controls. The desired outcome was to build awareness and curiosity for more information about the product and its effective active ingredient. Ad targeting led to a highly informative product-dedicated landing page with more information for strategic next steps.

Product Awareness
Programmatic ads targeted growers to let them know that Oxamyl was back on the market and available.

Educate Growers
The campaign helped growers recognize the importance of the Nematode problem and the urgency to protect crops in advance from specific pests.

Creative Approach
The lighthearted approach featuring an onion with a protective helmet increased curiosity and renewed their opinion of the new and improved product.

The programmatic ads targeted fruit and vegetable growers in targeted regions with a dedicated amount of crop acres. The assumption held true that growers would previously be aware of the effects of nematodes, yet they were unaware of when a product containing Oxamyl would be released again. The inherent need was already present, so the ads had an immediate effect on reminding growers on how Oxamyl protects plants from nematodes, thrips, and leafminers.

Most impressions were on mobile and tablet devices, so Stratagon advised to shift the majority of efforts to those devices to increase impressions and visibility opportunity of the ads.

2
Highly targeted segments of growers across 3 states that are directly affected by nematodes and in need of Oxamyl.
.15%
Constant average click rate of ads over a two-month period, above the .11% network average.
404
Site visits directly from the targeted ads, which increased education and awareness of product availability to growers.

This programmatic ad campaign won the 2018 Best of NAMA Chapter First for the Carolinas and Virginia for Advertising on the Web – directed to farmers, ranchers, or growers, and all others serving agriculture.

We appreciate Stratagon for supporting us to develop our website in HubSpot. With their professional services, we are able to efficiently implement digital marketing strategies to become more dynamic and competitive in the marketplace.

Let’s talk about your next project.Check it out.